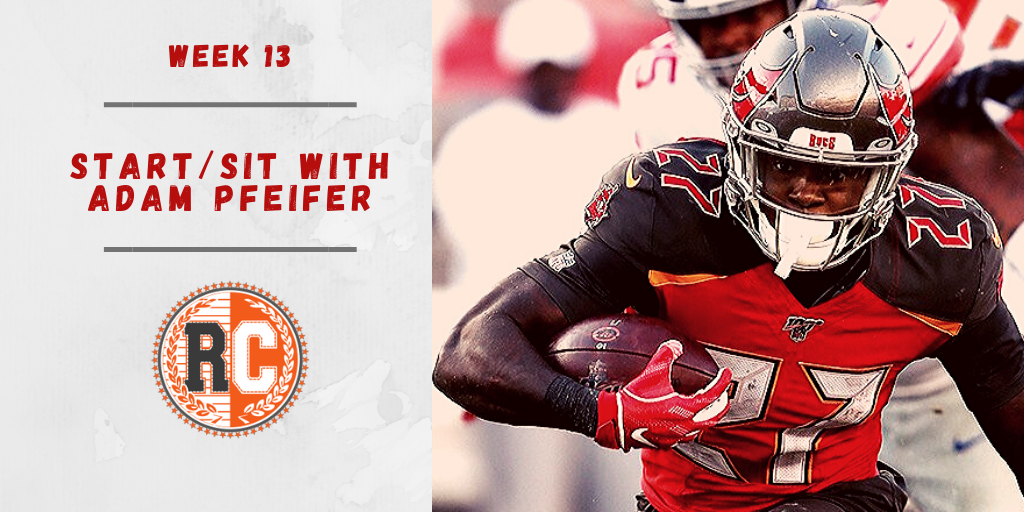 He’s not as appealing in seasonal leagues as he is in daily formats but Dalton is back under center for the Bengals this week and if you are in a pinch, he definitely makes a lot of sense. Because the Bengals have been so bad, Dalton was averaging 42.2 pass attempts per game and over 281 passing yards per game before being benched. I expect a lot of pass attempts again here, whether the Bengals fall behind or not, though they easily could given how well the Jets have been playing as of late. New York has been one of the biggest pass funnels in the NFL this season, as 75.6 percent of the yardage surrendered by the Jets defense has come through the air, the second-highest rate in the league. Meanwhile, 73.2 percent of the yardage accumulated by this Bengals offense has been via the pass the eighth-highest rate in football. The Jets have also allowed 20 fantasy points to four of the last five passers they’ve faced, a list that includes Ryan Fitzpatrick, Daniel Jones, Gardner Minshew and Dwayne Haskins.

On the other side of this game, you have to feel good about Darnold right now. Over the last three weeks, Darnold is averaging just over 25 fantasy points per game and a whopping 0.79 fantasy points per dropback. He is also second in the league with seven touchdown passes during that span. The matchups have been elite for Darnold but he gets another one this week, facing a Bengals defense that is generating pressure just 18.8 percent of the time this season, which is the fifth-lowest rate in football. That bodes well for Darnold, who is just 29th in the league with a 48 percent completion rate when under duress this season. They are also allowing 13.1 yards per completion this year, easily the highest mark in the league. That could help Darnold take more shots down the field, which he did a bit last week, as 10.3 percent of his passes last week traveled 20 yards or more down the field.

Wentz has been absolutely dreadful over the last few weeks. He’s been taking bad sacks and missing simple throws, though the injuries to the offensive line and wide receivers definitely haven’t helped. Luckily, Philadelphia’s pass-catchers are getting healthier for this game and the matchup is fantastic, as no team in the NFL is surrendering more points per drive than the Dolphins this season (2.62). Miami is also allowing the highest passing touchdown rate in football right now at 7.4 percent as well as the most fantasy points per pass attempt (0.61). It has been difficult to trust Wentz as of late but this should be an absolute bounce back spot.

Mayfield has been much, much better as of late, scoring eight total touchdowns and tossing just one interception over his last three games. This offense has looked a lot better but I’m not willing to instill all of my trust in him yet, especially in a tough matchup. Pittsburgh is sporting the second-highest pressure rate in the league at 30.7 percent, which isn’t great for Mayfield, as he is 35th in the NFL in completion rate when under duress this season. Also, the addition of Minkah Fitzpatrick has drastically changed this defensive unit. With Minkah on the field, opponents are sporting a 43.3 percent pass success rate, compared to 61.6 percent ith him off the field, per The QuantEdge. They are also allowing 7.2 yards per attempt with him compared to 9.2 without him. If you have to play Mayfield, I don’t think it is a death sentence but I’m definitely tempering expectations.

There is still some concern about Jones’ workload but if he can get 15 touches or so in this game, he could have a fantastic outing. Since Week 9, Jones has still played 46 percent of the snaps, which easily leads all Tampa Bay running backs, while Peyton Barber is at 20 percent. However, Barber is touching the football on 48.3 percent of his snaps during that span, while averaging just over seven touches per game. Barber also saw 11 carries last week, as his presence continues to cap Jones’ upside. Still, Jones looked good again last week, touching the ball 15 times for 67 yards and a touchdown, and now gets an awesome matchup. The Jaguars have allowed four 100-yard rushers over the last three games and are now surrendering a league-high 5.4 yards per carry on the year. Jacksonville also is sixth in missed tackles and eighth in fantasy points per game allowed to opposing backfields.

Even though we got word that Williams would serve as the starting running back last Thursday night, I had no clue that he would carry the ball 26 times. He added three receptions and played 67 percent of the snaps, while running a route on 17 of Jacoby Brissett’s 27 dropbacks. The Colts clearly want to continue to establish the run, no matter who is in their backfield. Marlon Mack is out again with the hand injury and Jordan Wilkins played one snap on offense last week. Indianapolis is still calling run 48.4 percent of the time this year, the fourth-highest rate in the league and given the volume he should see, Williams can be trusted as a mid-range RB2.

It may be tough to sit Mixon because at this point of the season, we need running backs who are going to get the ball. And Mixon is averaging a healthy 17 touches per game over the last two weeks. The problem is that he’s been almost a non-factor in the passing game. In 2018, Mixon averaged 3.9 targets and 3.1 receptions per game, but those numbers have dropped to 2.8 and 2.0, respectively, here in 2019. He also averaged 19.5 routes run per game last year compared to just 14.8 to this point of the season. If he wasn’t losing snaps to Giovani Bernard in catch-up mode, Mixon would be in play most weeks. But the Bengals average scoring margin of -12.3 is second-worst in football behind only the Dolphins. And this matchup is awful, as the Jets are stuffing a league-leading 34 percent of runs at the line of scrimmage, while a league-leading 25 percent of Cincinnati’s carries have been stuffed at the line of scrimmage.

Since Week 4, Parker is the WR16 in all of fantasy, as he continues his breakout year in a lost season for the Dolphins. He has recorded at least 50 yards or a touchdown in every game during that stretch, serving as the focal point of this entire offense. Over the last six weeks, Parker has seen target shares of 29, 24, 16, 30, 23 and 29 percent over his last six games, which equates to an overall market share of 25.1 percent during that span, which is up four percent from his total target share for the season. Look for Parker to continue to produce against an Eagles secondary that looks improved, but consider this.Over the last four weeks, they have faced the Bills in horrid conditions, the Bears, the Patriots in horrid conditions and then last week against Seattle, multiple touchdown passes were missed by the Seahawks. Philadelphia is allowing the sixth-most fantasy points per game to opposing wide receivers this season. They have also allowed the most fantasy points to perimeter receivers, as well as the second-most fantasy points per game to opposing receivers lined up on the right side of the formation (16.3), where Parker lines up 40 percent of the time.

With both Golden Tate and Evan Engram out for the Giants, this New York passing game should run through Shepard, who made his return last week. Shepard has seen nine targets in every game he’s played alongside Daniel Jones this season. Tate’s absence will move Shepard back into the slot, where he lined up 66 percent of the time before Tate’s debut. He is far more efficient in the slot and Jones is targeting the slot 39 percent of the time on the year. The Packers pass defense has taken a step back as of late and struggle to defend the middle of the field. Given the target projection, Shepard is a top-25 receiver play for me this weekend.

Westbrook saw nine targets last week, as Nick Foles averaged a laughable six yards per pass attempt. But if he continues to play conservative, Dede would benefit, especially with Foles targeting the slot 37 percent of the time this season. The matchup is as good as it gets, as the Bucs are actually allowing 25.1 fantasy points per game to the slot this year, the second-most in the league.

Sanders has been dealing with a rib injury the last few weeks, which has perhaps played a role in his underwhelming numbers as of late. Over the last three weeks, Sanders has just six catches on 10 targets for 72 yards, while ranking third among San Francisco wide receivers in snap rate during that span (44 percent). I am tempering expectations for Sanders this week, as the 49ers head east for an early game and face a strong secondary. Sanders will line up against Marlon Humphrey, who is allowing just 1.20 fantasy points per target, the eighth-lowest mark among all corners this season. His 77.3 passer rating allowed in coverage is also the eighth-best number in football, making this a very difficult spot for Sanders, especially considering the Ravens have three cornerbacks they can throw at him.

His upside might make him tough to bench but there are plenty of red flags here. For starters, he should be shadowed by Casey Hayward, who has allowed just 0.29 fantasy points per cover snap this season, a top-20 mark in football. He is also fourth-best in terms of target separation this year (0.62). The Chargers have been a top-10 team at limiting fantasy points to opposing wide receivers and now they got safety Derwin James back from injury. You also have to wonder how Drew Lock is going to look in his first start, making Sutton a risky play this weekend.

Eric Ebron was placed on injured reserve and requires season-ending surgery on both ankles. This is very noteworthy, as Ebron has played 42 percent of the snaps this season, but has run 211 pass routes compared to Doyle’s 228, despite Doyle playing over 70 percent of the snaps this year. In fact, Ebron had been targeted on 15.9 percent of his snaps this season, the second-highest rate among all tight ends on the year. Ebron has also seen five end zone targets this year, as well as 24 percent of the Colts red zone targets. All of this should open up the door for Doyle to be a more consistent fantasy option, though he is still third among all tight ends in run-blocking snaps (268), while the Colts are calling run 48.4 percent of the time, the fourth-highest rate in football. But a huge reason behind Doyle’s huge run-blocking role was the fact that it was Ebron’s weakness, while someone like Mo Alie-Cox is much better, so we could see Doyle run far more routes going forward.

With Gerlad Everett nursing a knee injury, Higbee will step in as the starting tight end for the Rams. Normally, I still wouldn’t look to him but the tight end position is so bad and he gets the best matchup on the board, facing a Cardinals defense allowing the most fantasy points per game to opposing tight ends on the season (17.7), as well as the most receiving yards (79.2) and touchdowns (1.1) per game.

Since Week 8, he has played 83 percent of the snaps, while ranking fifth among tight ends in targets during that span with 28. He has been targeted on nearly 14 percent of the snaps in that stretch but now faces a tough matchup, as James makes this defense so much better at defending tight ends. And we don’t know how Lock is going to utilize him. Hopefully the Broncos continue to try getting him involved with Lock under center because he can make plenty of big plays.