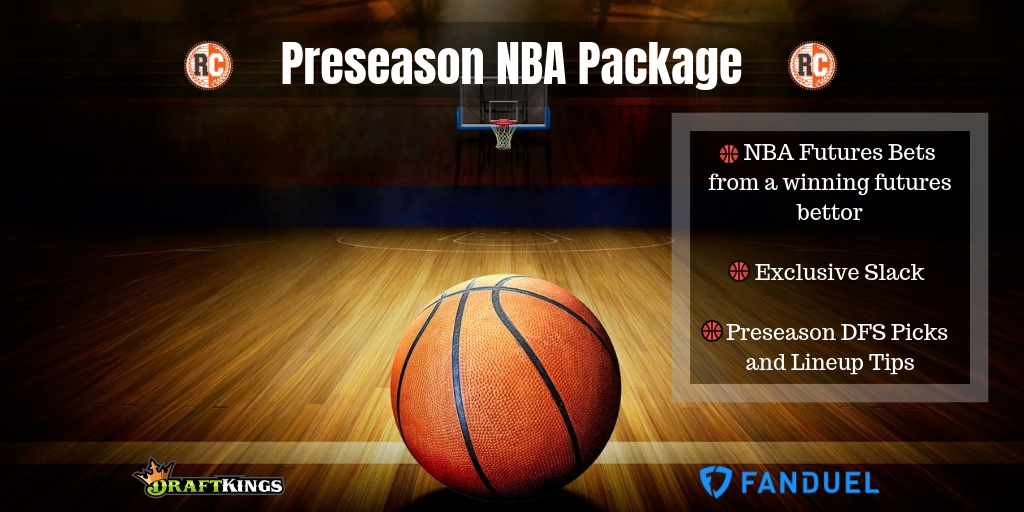 Hello everyone! I am Josh Gross, and I will be leading the charge in the NBA Preseason!

We’ve done Preseason NBA here at RotoCurve for the last couple years, and my success in it pre-dates starting content at RotoCurve.

I have always been adamant that Preseason NBA is a fantastic way to boost your bankroll before the season begins, as cash games tend to be very easy as long as you follow news, but the ultimate goal of course is to take down some GPP’s which I have done in years past.

New this year will be an exclusive slack chat where you will be able to ask any questions and have my full attention, as well as NBA Futures Betting, where you’ll get my favorite Futures Bets for the season, in what proved to be a very profitable area last year, and you can see some of my bets from last year below!

THIS YEAR, THERE IS AN EXCLUSIVE LINK TO NBA EARLY BIRD SPECIAL. BEST DEAL YOU WILL GET FOR NBA SEASON WITH OPTO. FIND, PRESEASON MEMBERS ONLY.

With that said, there’s no better NBA Preseason Package than what we have here at RotoCurve! (Below you’ll find screenshots from a GPP takedown, how I typically attack cash games on a nightly basis via H2H, and futures bets from last year). 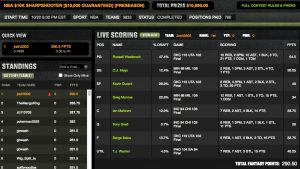 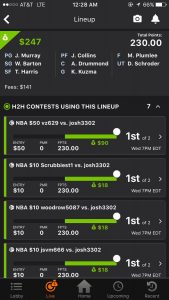 Looking through all these Bovada props

Will be updated soon when lines come out!

FOR ALL UPDATES PLEASE CHECK THE SLACK CHAT!!!

This is shaping up to be a dress rehearsal game for the Sixers, but expect them to remain cautious on Embiid’s minutes. He’s been trailing others in minutes all preseason, and I’d expect the same tonight even in a “Dress Rehearsal”. He should end up somewhere between 26-29 minutes, potentially seeing one extra small rotation in the late 3rd/early 4th. Considering James Harden is on this slate, it’s difficult to spend up on Embiid. Point Josh Richardson returns tonight with Simmons out once again, which means of course, more touches, usage, and minutes for J-Rich, in a terrific matchup.

I don’t think we get any word on what the Raptors plan to do until closer to lock. Some guys saw 30 minutes, while others saw 20 minutes in last years Preseason finale. If they let their starters loose, Siakam of course is the best option, who will carry the most usage, along with a terrific matchup with Brooklyn a bit undersized. Marc Gasol would have the pleasure of seeing DeAndre Jordan (or Jarrett Allen). He’s produced over 1 DKPPM pretty much consistently against both bigs, and I would suspect he sees 26-28 minutes if not held to any major restrictions tonight.

Kyrie Irving will “play significant minutes but be on a minutes limit” tonight. Anyone understand how that makes any sense? Didn’t think so. Having hardly played this preseason, the Nets definitely want to get Kyrie some good run, but the exact plan here is undeniably uncertain. It’s possible he can get you 30-33 minutes at a very low ownership given other options on this slate, making him a great GPP option.

There is nothing to suggest James Harden won’t see his usual 30-34 minutes of run tonight, so deploy him without questions. The Heat may be deploying their B squad as well, which is bad news for Miami, leaving Harden with an insane ceiling, even if he ends up being limited to 24 minutes or so. Eric Gordon and Danuel House at near minimum salaries will also be in play at what once again looks like a weak SF position.

On the Miami side, we’ll have a clearer idea of what to do once they announce who is resting, but you can expect Jimmy and Dragic to be out, while I’m 50/50 on whether Winslow/Olynyk sit, as well as any others. Without Butler/Dragic/Winslow, Nunn would be in a similar spot as an earlier game in this Preseason when he started at PG, seeing 24 minutes. Dion Waiters would see insane 2nd Unit usage as he did in that same game, while Duncan Robinson could start while seeing 30+ minutes after being limited last night (which may have hinted he’ll play quite a bit tonight).

Jeez this could be some game. Currently holding a 233 total, the slate high by nearly 10 points, and without Zion, the Pels will be an interesting team to target, however they’ve maintained a consistent evenly spread out usage across their lineup, sans Zion. I think Nico Melli steps in to start in place of Zion, and he really fits the mold of the type of player Gentry loves, with the ability to play a Nikola Mirotic type role. Gentry also LOVES playing two bigs, so I tend to believe (especially against Julius/Portis) they go bigger at the four than say, Josh Hart of NAW at the three with Ingram the four. Lonzo should be considered assuming Pels see good minutes tonight, which I believe they will, four days out from their opener. Favors is also in play without Zion, as he should see more action inside.

On the Knicks side, for whatever reason Fizdale is pushing his guys in the Preseason, seeing heavy, heavy minutes. I don’t know if he’s trying to build a winning culture in the Preseason or what (because that’s not working at 1-2), but we’ll enjoy it while we have it. Expect the same 34+ minutes from RJ Barrett in a nuts spot as the Pels have posted the fourth worst defensive rating among NBA teams this Preseason, while playing at the fourth quickest pace. Julius Randle has now seen 27, 29, and 35 minutes in the Preseason, and gets his former club this go-around. I hate using the term “Revenge Game” especially in a meaningless Preseason game, but getting those kind of minutes against a team that has allowed the second most PITP per game in this Preseason is what we call a nuts matchup, considering he ranked 7th in PITP per game a year ago. With Ntilikina out, expect DSJ and Elf Payton to split the minutes at PG, with DSJ getting the slight edge on run, having been out most of the Preseason. There’s still a battle for Starting PG going on, so DSJ needs a big game, and he’s near min priced in what should be a very DFS friendly game.

Not the best game to target, as Pop can always pop us, but I do have some interest in Ja Morant at his cheap price tag. Brandon Clarke, with big minutes could also have quite a night rebounding, as the Spurs haven’t done great in that area throughout the preseason.

If you’re feeling lucky, you can take a shot on Alridge, who should be virtually unowned, and if he gets 30+ minutes, has a chance to really burst his value point, given the usage that will come his way in a really above average matchup.

See below for the Lakers situation, then underneath both images for thoughts 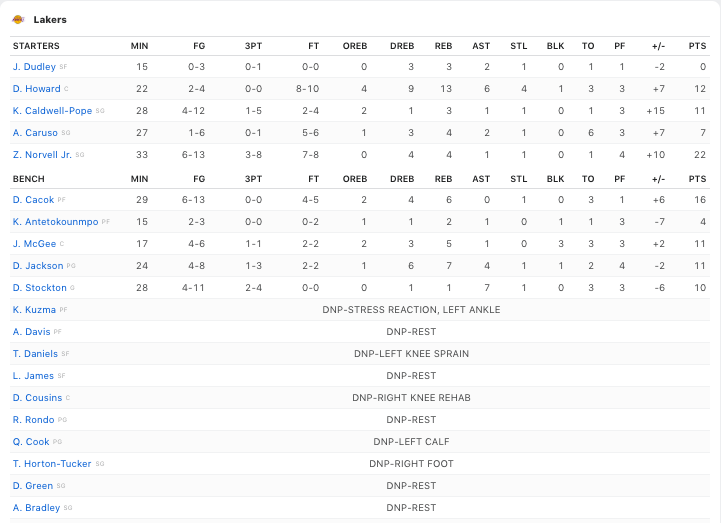 So basically, this is two games ago for LAL but without Javale/Dwight. Cacok is a LOCK for 32+ minutes tonight, and Kostas is probably in that same ballpark as well. Expect Norvell to see 30+ minutes assuming no foul trouble. If for whatever reason Cacok or Kostas gets into foul trouble, I have absolutely no idea what the Lakers do tonight, as they legitimately have just three “bigs” active, one of which is Jared Dudley. It’s possible one of Javale/Dwight end up active because I believe you need a minimum of 10 players “dressed”, in which case said person would only play in an emergency situation (IE: Cacok and/or Kostas foul out).

On the GS side, I think you are taking a chance if using Steph or Draymond. Yes, Kerr said he wants to get them 30+ minutes, but I mean come on. Why risk ANYTHING against this Lakers squad? It doesn’t really do them any good. If anything, get them their 30+ minutes in some sort of team scrimmage. Steph is still in play in GPP if you want to chance things, and his upside is probably 60+ FP with 30 minutes, but I just can’t do it in cash.

Please confirm deletion. There is no undo!