Adam Pfeifer will break down every game for NBA slates Monday-Friday. Learn which games to play, which to fade, and the best plays from each contest. A full breakdown to help you win on various slates. 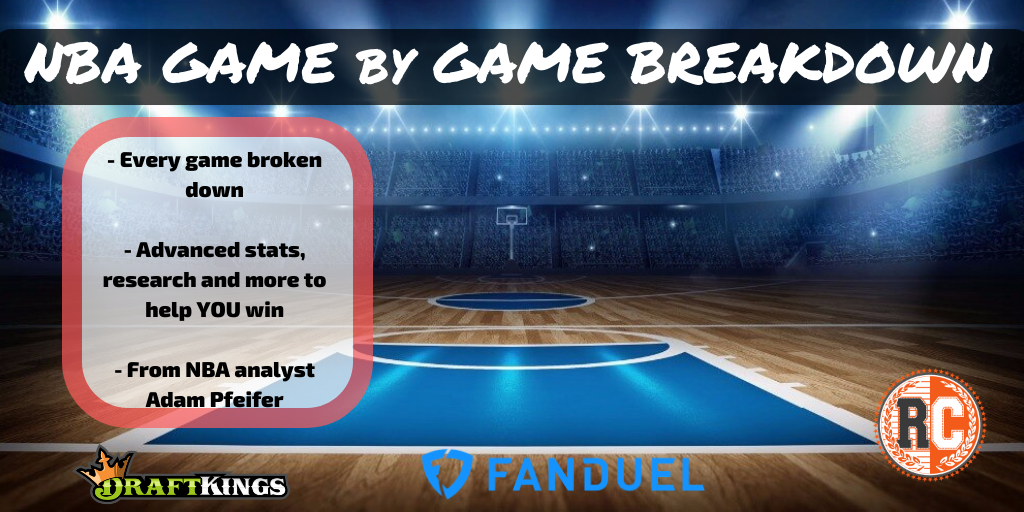 On this Wednesday slate, we will go with the Core Four format.

Hunter is off the injury report and the rookie had a solid game the other night, scoring 13 points and adding 11 rebounds. He should be locked into 33 or 34 minutes and isn’t priced egregiously anywhere. I usually don’t love playing wings from the Hawks outside of Kevin Huerter and his consistent 35 minutes but this is strictly a matchup play, as Hunter faces the lowly Knicks defense that is coming off the front end of a back-to-back. As I have detailed countless times this season, the Knicks are an atrocious spot-up defense, surrendering the most points per possession (1.11) and highest field goal percentage (42.4%) to opposing spot-up shooters. That bodes well for Hunter, who leads the Knicks in spot-up points per contest on the year (4.6), a number that ranks 17th in all of basketball. He is also spotting up nearly 35 percent of the time, making Hunter a sneaky mid-range play this evening.

Jokic hasn’t showcased his ceiling over the last three games, while his minutes have been in the low thirties during that span. However, I seemingly always have interest in a versatile player like Jokic, who still leads the entire NBA in touches per game (97.5)– as a big man. The upside for a strong triple-double is always going to be there with someone touching the ball that much and while Denver runs so much dribble handoff, Jokic is also posting up a good bit, too, which is notable for this matchup. Jokic is averaging 5.1 post-up points per game this season, good for the third-most in basketball. The Mavericks, meanwhile, are surrendering more post-up points per game than any other team in the league (7.1).

There is nothing special about this matchup, especially if Joel Embiid is able to return for the 76ers tonight. However, Maker is a dirt cheap value play that can offer some salary relief. He played 28 minutes in the last game, as John Henson got into early foul trouble. Henson is now going to be sidelined for the next week or so with an ankle injury, opening up a path for Maker to play relatively big minutes again tonight, especially against a bigger Philadelphia team. Over the last two weeks, Maker is sporting a solid 24 percent rebounding rate and he should be viewed as one of the better value plays on the board.

I definitely will be looking to target players from this Pelicans/Kings game tonight. New Orleans has four key guys who are expensive but very strong fantasy producers. All are in play but let’s focus on Ingram, who is coming off a solid game, though it was weird to only see him shoot the ball 12 times. There is no denying that we haven’t seen as consistent of a ceiling from Ingram since Zion Williamson made his debut but Ingram is still sporting a respectable 26 percent usage rate when sharing the floor with Zion, while averaging 1.17 fantasy points per minute. I like the spot for him tonight, facing a Kings defense that is allowing a league-leading 1.04 points per possession off isolation this season, as well as the highest field goal percentage to the play type (46.8%). Ingram, meanwhile, is averaging a healthy 3.1 isolation points per game on the year, good for the 12th-most in the NBA.