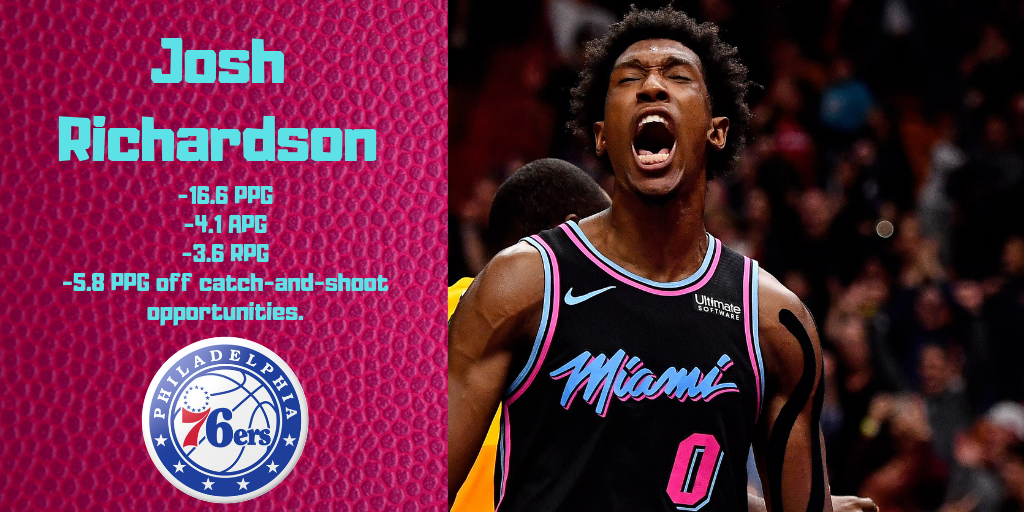 Especially as a kid, it was the best. You go to a party, load up on sugary snacks and then transform into an absolute tornado of chaos before ultimately crashing. The NBA is a lot like that fired-up kid on a sugar rush except there is no crash.

The association is wild at all times and 2019’s Free Agency has been no different. Opening day was arguably the most insane we have ever seen, as multiple superstars switched teams. Kyrie Irving and Kevin Durant joined forces in Brooklyn, Jimmy Butler went from South Philadelphia to South Beach, Kawhi Leonard and Paul George united in Los Angeles and Kemba Walker returned to the area where he made a name for himself in college. It has gotten to the point where diehard fans literally have to sacrifice their sleep in order to assure that they are dialed in at all times. During this time of the year, Adrian Wojnarowski likely gets more attention than most significant others and family members. NBA fans refresh Twitter every minute looking for Woj Bombs, and there have already been an insane amount. But while the big name players will soak up the headlines, I wanted to touch on the more overlooked free agent additions that will provide their new teams with tremendous value.

Jimmy Butler apparently wanted a team built around him, so the 76ers moved on from him, signing and trading him to the Miami Heat. In exchange, Philadelphia acquired the 25-year old Richardson, who honestly resembles Butler in many ways. The team also signed veteran big man Al Horford, who will soak up most of the attention. But 76ers fans are going to love Richardson right away, as he presents a ton of upside and potential.

There is a lot to like about Richardson. For starters, he is just 25-years old and is coming off the best season of his career, averaging 16.6 points, 4.1 assists and 3.6 rebounds per game with the Heat in 2018. In a Miami rotation that often used a bunch of guys, Richardson’s minutes were perhaps the one constant, averaging 35 minutes per night. With the Heat, Richardson ran some point because Goran Dragic was hurt for the majority over the year, averaging nearly six pick-and-roll possessions per game. Of course, Miami also used Justise Winslow a lot at point, and because the team had so many wings, Richardson finished the year with a 20.3 percent usage rate, which ranked 158th among players that averaged at least 30 minutes a night. Still, he posted strong numbers and will be in a position in Philadelphia where his usage might hover around the same spot but the efficiency should go up.

Richardson shot just 41.2 percent from the field and 35.7 percent from three last year. However, the 76ers will draw up plenty of plays for him, while Ben Simmons and Joel Embiid will help him get good looks. In 2018, Richardson averaged 2.4 points per game off handoffs, the ninth-most in all of basketball. He sported a 14.1 percent frequency rate off the play type , though he only shot about 39 percent from the field on such shots. Of course, we know Philadelphia will run a ton of handoffs with Embiid and Brett Brown, as no team operated the dribble hand-off more than the 76ers last year. A lot of that had to with J.J. Redick, who was elite in that role. He’s gone and while Richardson won’t be used in quite that same role, the 76ers should use Richardson in a similar way at times and because Embiid and Horford are two of the best screen-setters in basketball, Richardson should get way more open looks going forward. Richardson was also an effective catch-and-shoot player, averaging nearly six such points per game last year. He’ll be asked to do that a lot with Simmons running the point and Embiid often getting double-teamed. Simmons ranked seventh in the league in assist points created per game a season ago at 19.8 and Richardson will benefit. A gifted scorer who won’t demand the basketball, Richardson will fit in nicely.

Meanwhile, he’ll also have an impact on the defensive side of the ball. Richardson was 12th in the league in defensive win shares last season, while his size and wingspan will help the 76ers be an elite defense in 2019. He was also eighth among all qualified shooting guards in defensive plus/minus (0.35). His size will give the team versatility on switches, while he and Simmons will make for a very long defensive backcourt. The 25-year truly resembles the man he is replacing (Butler) but is an absolute bargain, serving just one season of his four-year, $41.9 million contract thus far. At 6’6″ with a 6’10” wingspan, Richardson is a massive upgrade over Redick in every aspect of the game outside of three-point shooting. He fits this team well and will be loved from the start. 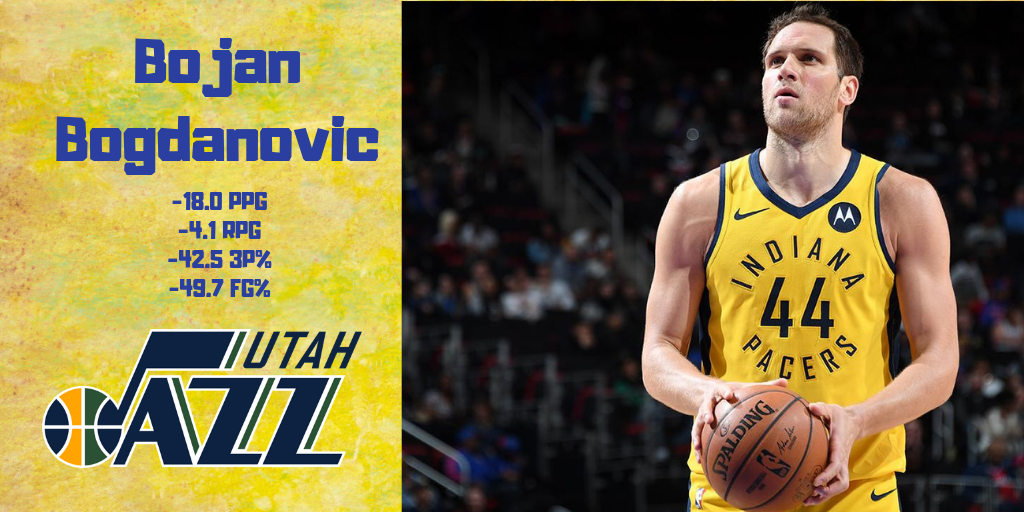 All offseason long, Bogdanovic was one of my favorite free agents. After a career 2018 season, you knew he was going to see a nice pay day but I still don’t think many people truly realize how good of a player he has been and will continue to be. Despite losing their best player in Victor Oladipo last season, the Pacers stayed afloat and finished fifth in the Eastern Conference. Bogdanovic was a huge reason why, as he averaged 20.7 points, 4.1 rebounds and 2.4 assists per game after Oladipo was sidelined. The 30-year old wing is coming off the best season of his career, averaging 18 points and 4.1 rebounds per game, while shooting an impressive 42.5 percent from three and 49.7 percent from the field. While he isn’t elite at anything, Bogdanovic is very good at most, possessing the ability to score off spot-ups, cuts, off screens and in transition.

Bojan shot 47.4 percent off spot-up shots and 46.4 percent off of screens last season. Only Joe Harris of the Nets and the Splash Brothers in Golden State averaged more points per game off screens (3.8). He also shot 46 percent off catch-and-shoot opportunities and about 45 percent off such three-point opportunities. With Utah, his usage is likely to go down alongside Mike Conley and Donovan Mitchell but he will get plenty of great looks, especially with Rudy Gobert setting screens. He will help space the floor for the Jazz, who got inconsistent shooting from guys like Jae Crowder and Joe Ingles a season ago. In 2018, Bogdanovic shot 52 percent off corner threes and with Mitchell ranking fifth in the league in drives per game (16.9), the floor spacing will be fantastic. The Jazz also brought in Ed Davis, who likely starts at the power forward but I could see Bogdanovic closing games out in the fourth quarter of games. Adding Bogdanovic, Conley and Davis to an already strong team will bolster the Jazz towards the top of the Western Conference standings in 2019. 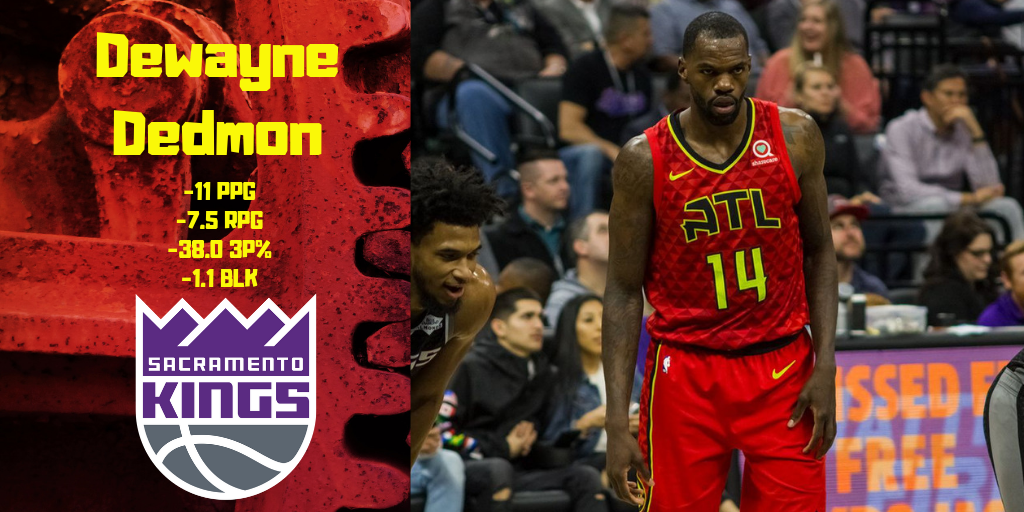 Dedmon has always been one of the more underappreciated centers in all of basketball. Heading into free agency, there were a handful of teams that made a ton of sense for the 29-year old big man. He ultimately signed a 3-year, $40 million deal with the Kings and makes for a better fit alongside stud rookie Marvin Bagley than Willie Cauley-Stein did. After offering literally nothing from beyond the arc during the first six seasons of his career, Dedmon started to add that to his game during his two seasons with the Hawks. In 2017, he attempted 2.3 per game, shooting 35.5 percent. And last year, he shot an awesome 38.2 percent from three-point land on 3.4 attempts per game. That ability to space the floor will do wonders for Bagley, who posted up a ton last season. Cauley-Stein, meanwhile, didn’t space the floor, attempting just 18 total three-point attempts over the course of his career.

He can also still absolutely protect the rim, averaging over a block per game last season. That will hopefully help a Sacramento defense that surrendered 51.3 paint points per game last season, good for the fifth-most in the NBA. At a very affordable contract, Dedmon will offer a lot to this Kings team in 2019. 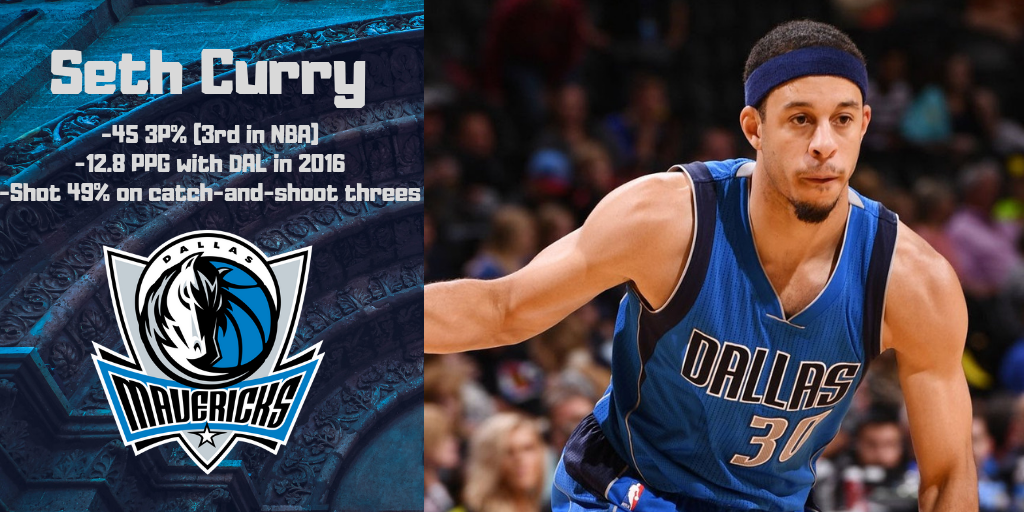 The Lakers would have loved to have a shooter like Curry but they had to wait for Kawhi’s decision. Curry got paid a lot of money by the Mavericks, inking a 4-year, $32-million deal. Last season, Dallas lacked perimeter shooting, sporting the fourth-lowest three-point percentage in the NBA at 34 percent. Curry, of course, finished third in the league in three-point percentage last year at 45 percent. He has already had success with the Mavericks back in 2016, averaging a career-best 12.8 points per game. Now alongside Luka Doncic and Kristaps Porzingis, Curry will get even better looks than he did that year and will space the floor tremendously. Last year, Luka averaged a healthy 14.7 drives per game, good for the ninth-most in all of basketball. Meanwhile, back when we last saw Porzingis in 2017, he averaged eight post-ups per game, the sixth-most in the league. Both players will force the defense to collapse, while Curry will hang out on the perimeter where he shot 49 percent off catch-and-shoot opportunities a season ago. This team desperately needed shooting, making it possible that they overpaid for Curry. Still, he is just 28-years old and continues to improve each season. I like the fit alongside Doncic and Porzingis.